We Grew TWO Loaves of Bread!

On Saturday, October 12th we finally baked the bread that we started making on April 20th. It took us 176 days to make the field, plant the wheat, harvest it, thresh, winnow, mill it into flour, and then bake it into two loaves just in time for Canadian Thanksgiving!
We chose a whole-wheat quick bread recipe from Jean Pare's "Company's Coming: Muffins & More" recipe book. The recipe is on page 110, and is called "WHOLE WHEAT BREAD". It was a simple recipe, and looked like it would work for us, so off we went! 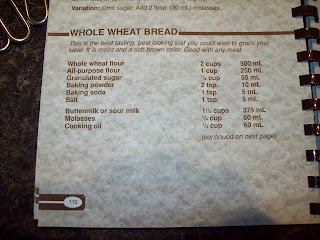 We carefully mixed our dry ingredients using all of our "shorts" and our flour. We kept the bran out of the bread, and we will put it in some cookies later. All of the flour and shorts together gave us about 7 cups of flour to work with, so we had enough for two loaves, plus a bit left over! 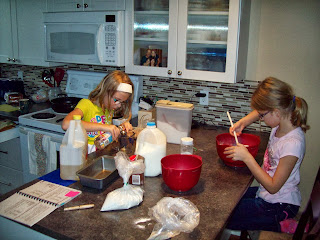 Mixing by hand was a bit tough, so we all took turns. Then we poured our batter/dough into a pan that we lined with parchment paper. The paper makes the loaf really easy to remove once it is baked. 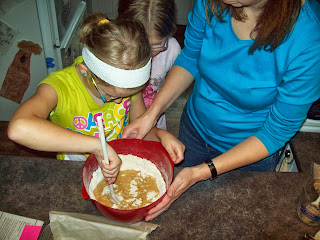 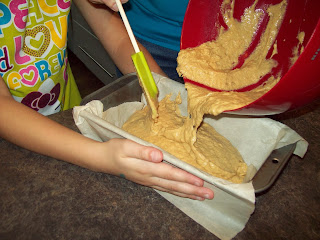 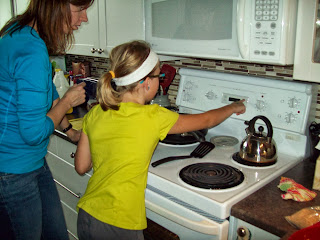 We put the pan in the oven at 350 F for 40 minutes, and while it was baking we got our second loaf ready! 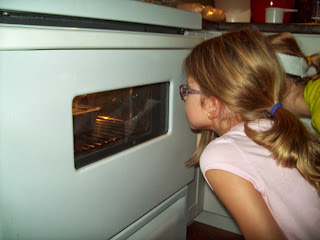 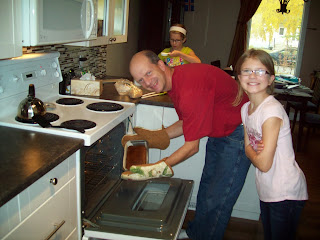 After we repeated the whole process one more time LOAF TWO WAS THROUGH! 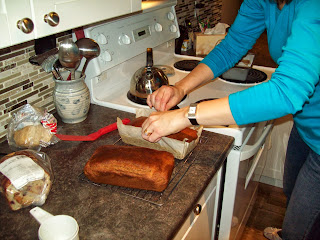 All there was left to do was let it cool (a bit) and then finally try our bread, right from our own back yard! Well, the sugar, molasses, baking powder, baking soda, vinegar, milk and oil weren't from our yard, but the flour was! Thanks to all of those people that made all of those other ingredients too, whoever you are! 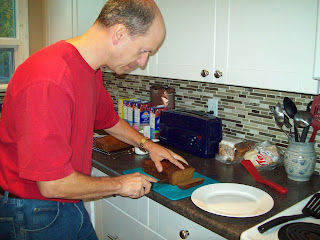 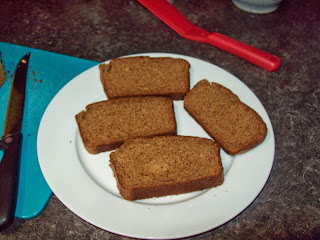 The bread tasted really good. It was sweet, not too heavy, and almost like a muffin. We will make this recipe again, even if we do NOT grow our own wheat to make the bread! The next morning we had some of our own bread toasted for breakfast.
For Thanksgiving, we went to Amma and Grandpa's house, which is about a two hour drive from our place. We took our bread along to be part of the Thanksgiving meal, and all of us enjoyed it. We have so much to be thankful for, and now we also know how thankful we can be for the bread that we buy in stores. Can you imagine if we all had to make our own bread?
Along the way we learned that you can grow two loaves of bread from a 4x8 field of wheat, so one loaf could be grown on a 4x4 plot, if the yield was good. Use a hard wheat. We did not fertilize or water our crop, so doing either will likely improve the yield. Milling is tricky. You could do it yourself, but getting help on a project is always ok too, and you might make some new friends (thanks again, Cigi!). One of the loaves has been eaten, and the other one frozen. We will eat it on special occasions between now and Christmas. Thank-you to all of you who have followed the blog! 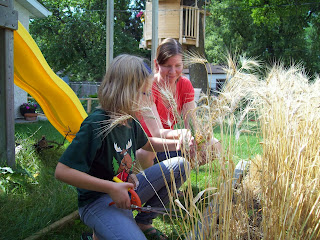 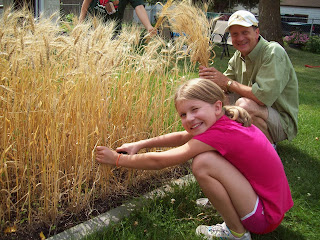 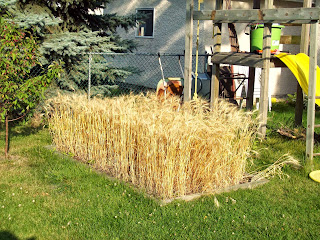 Our Wheat is Now Our Flour: Thanks CIGI!

We had a few choices about how we would turn our wheat into flour. We knew that we might be able to use a Vitamix machine (thanks for the offer, Mrs. Becker), or we could use a coffee grinder, or we could mill it with a couple of used grindstones from an old Bosch Food Processor that we bought on Kijiji.

In the end, we didn't do any of those things. Instead, we made some new friends at the Canadian International Grains Institute, which is located in down town Winnipeg. Ashok and his colleagues kindly offered us their time and their expertise as wheat scientists to help us with our project. Thanks Cigi! Here is a link to find out more about Cigi: http://cigi.ca/

But our milling story started a little before we got to Cigi. First of all, we finished up the drying, and decided to weigh our wheat.
After careful measuring, it turns out that our 4x8 field of wheat produced 908 grams, or exactly 2lbs of wheat. In the Spring we planted 207 grams of wheat, but we know that we over-did it. Even with the over seeding, our harvest of 908 grams means that we got close to 4.4 grams of wheat for ever gram we planted. Experts tell us that we did ok for just starting out! 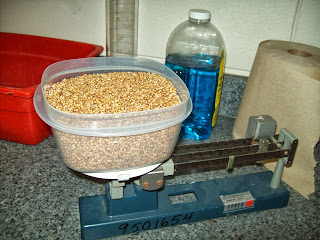 We were careful to weigh the container separately as well, so that we knew the correct weight of the wheat.

Now we had to figure out milling. We learned about Cigi after doing a Google search for milling options in Winnipeg (where we live). Since they had a Twitter account, We Tweeted out to them to see if they could help us in some way:


@Roy_Norris just read your tweet an blog post. Great experience you created. I could refer your inquiry to our milling department?
— Cigi (@CigiWinnipeg) September 24, 2013


@CigiWinnipeg Please do! Thanks for helping us to figure out the next step with our wheat project! DM to set up a time we could chat!
— Roy Norris (@Roy_Norris) September 24, 2013


After a few days and a phone call or two we took the wheat downtown to the Canadian Grain Commission Building on Main Street. Then we went up to the 10th Floor, and then to the Pilot Mill on the 11th Floor.

What happened in the Pilot Mill? Well, we have flour now, and we know how we got it. The good people at Cigi helped us by milling it into flour, bran and "shorts", which are the left-overs that are not flour or bran. They kept our wheat overnight and prepared it by "tempering" it. More about that process will follow in a blog post soon to come.
So our wheat is now flour, and we are starting to figure out what recipe would be the best for our bread. We plan to add the "shorts" to the flour and bake them into the bread, but we have not decided on a recipe yet. In the end, we have 688 grams of flour, 190 grams of bran, and 65 grams of shorts. Cigi also kept a 20 gram sample of our harvest so they can do some further testing to tell us a bit more about our wheat. Thanks Cigi! It was good to make some new friends!
So we got some help with the milling and made a few new friends. This was a fun part of the project! Now we will have to figure out our recipe. Canadian Thanksgiving is around the corner!

We Threshed and Winnowed the Wheat!

We were very busy after school on Monday September 16th! Our friend, Brittany, was over to visit and the weather was good, so we did some "wheat work".
We used a piece of wood from the garage and a few old play mats to set up a hard and clean spot in the yard. Then we covered it with a bed sheet, and held it in place with some chairs and wood, since it was a windy day. 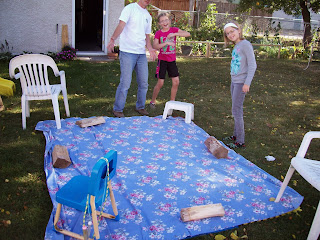 We got the idea to use some wire fencing (it is also called hardware cloth) from a YouTube video by John Jeavons all about threshing. We watched a few other videos with other methods, but this one looked like it would work the best for us. Here is the link: https://www.youtube.com/watch?v=3FXNCNSkdaM&feature=youtube_gdata_player
We also knew that we would need shoes with flat bottoms for this, since we were getting ready to stomp on the grain and we didn't want to get it stuck in our shoes.
With the screen in place on the threshing floor, we didn't need to separate the straw from the heads, we just placed the heads over the screen, stepped on the straw, and started a little shuffle on the wheat to do the threshing.
Our method worked pretty well, but it was a bit hard to balance on the edge of the screen sometimes. We all took turns, and the threshing took about an hour from start to finish.
After we threshed a sheaf or two, we removed the screen, separating the straw from and some of the chaff from the grain. Then we simply swept up the wheat, and repeated the process until all seven of our sheaves were threshed.
After a while we really started to realize how much work it is to thresh wheat. Our system was working well, but it took an awful lot of "Wheat Dancing" to get through those seven sheaves!
Finally we removed the screen for the last time and got to start cleaning up. With four of us threshing it really took about an hour, but we worked pretty hard for that hour! 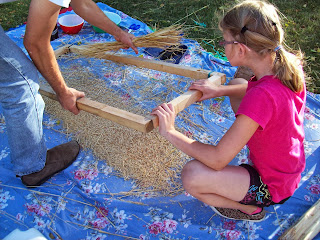 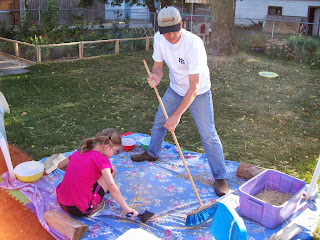 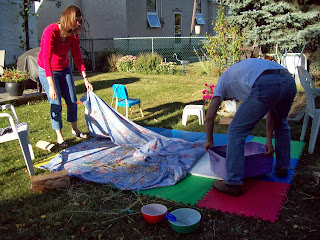 With the threshing all done we emptied whatever was left on the sheet into our bin, and that also helped us to get every piece of wheat (and to keep the seeds off of the lawn too!). 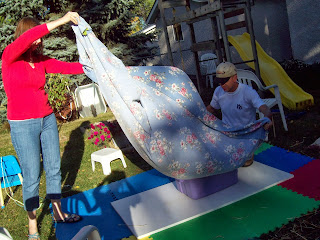 We were wondering how long it would take us to clean all of the straw and husks off of our threshed wheat. It was a windy day, and after we took a bit of a break we decided to winnow the wheat, since we still had sunlight, and it was pretty windy out. Most people use a fan to winnow, and we would have done that too, but the wind worked just fine.

This week we have been drying the grain, and cleaning it. The grain should be at about 12% humidity (inside the grains) before we try to grind it into flour. We have no idea how to measure that, so we'll just dry it out for now. If the grain starts to stick together or gum up when we try to grind it then we will know it is still not ready. We also have to figure out a quicker method for drying. Right now we just have it sitting in a warm room on cookie pans.
While the wheat is drying we have to figure out how we will grind it into flour. This process is also called "milling". We have read a few ways we could try, but we have not settled on a method yet. Hopefully the grain will be dry enough when it comes time!

We have not yet weighed our grain yet to figure out how much we yielded from the 4x8 field we planted. We do know that it fills up 2/3 of a large Peanut Butter jar. Maybe we will weigh it properly next week. We also don't know how much flour it will make, or what recipe we ought to use for the bread when we get there.

We are getting close though!

And that is all we know so far.